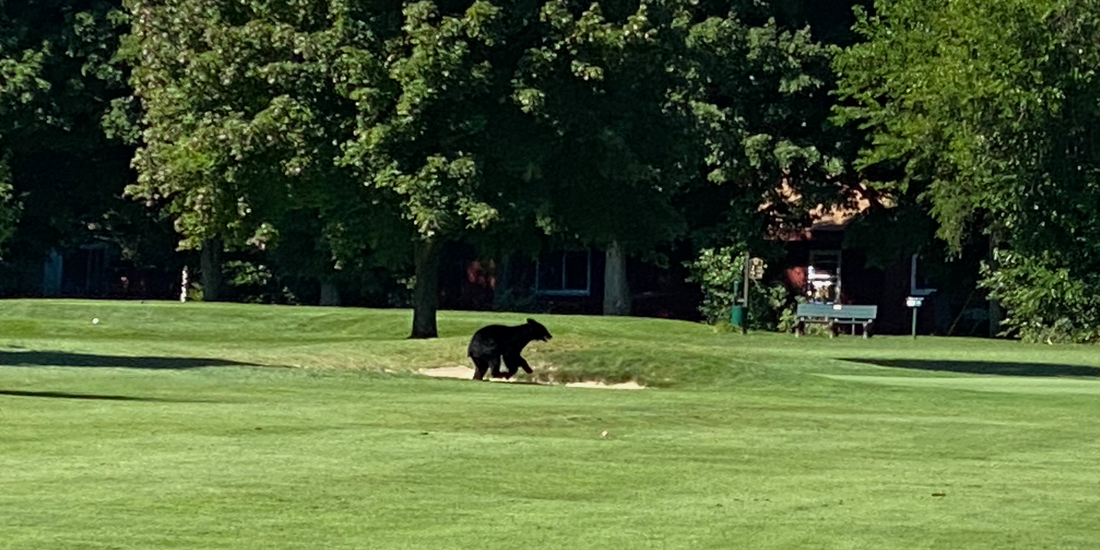 Bear spotted in the morning on Elk Rapids Golf Course - August 2022
August 17:  It was a beautiful morning for the Elk Rapids Ladies Golf League. While playing in the fairway, one of our foursome shouted BEAR! We all looked to see a black bear running across hole two toward the green on hole one. This unusual sight, perhaps a first during league play, caught our attention as we continued to watch it make its way toward Ames Street, where traffic stopped. It was sighted at other locations in the Village later that morning. I understand that the ladies playing hole 6 saw a Fox around that same time. Perhaps they saw each other and ran in opposite directions! _Cheryl Bachman.
Note: Bears, cougars, foxes, deer, tree martins, etc. are increasingly seen in cities and small villages like Elk Rapids. What this means is their natural habitat is shrinking, raising questions about how humans and non-humans can share habitat, and more importantly, why it even matters. Such topics as wildlife corridors and animal habitat are gaining attention nation-wide and are increasingly a topic of neighborhood discussions.

Here are a few comments from around town:

A very active cardinal has been singing its heart out early evenings in the vicinity of Ottawa and Chippewa Streets. No one was sure why it would sing non-stop at that time of day or this time of year. A neighborhood word jockey described the bird as “crepuscular”, which refers to events relating to twilight.

Kay Charter, Saving Birds Thru Habitat, offered this opinion: “In general, birds sing to attract mates, to defend their nesting territories, and to warn of dangers. They are genetically triggered to begin singing in the morning’s first light until sunset. However, “songbirds” (those birds we typically find at our feeders), also occasionally sing for what we would call “the joy of it.” They just sing. Mockingbirds, thrashers and catbirds typically sing at night, but birds like cardinals do not. However, if a male cardinal (and it would have been a male) sings at night, we must assume he is doing it for the joy of singing.” _Kay Charter, Savingbirds.org.