December is the “Cold Moon” month, and a month of many special holidays. Sometimes described as “bleak”, it can also be dazzling and exhilarating, and a great time to enjoy the outdoors.

Saint Nicholas Day, named for the patron saint of Children, inspiring countless traditions around the world.

The Christmas Bird Count is an annual event conducted by citizen scientists around the world, intended to track the growth or decline of various bird species and track climate change impacts. Originally called the “Bird census” this event was inspired by Ornithologist Frank Chapman. On Christmas Day 1900, the 36-year-old Chapman – then an associate curator of ornithology and mammalogy at the American Museum of Natural History – spent the day scanning the skies near his New Jersey home to take a survey of the birds in his region. After sighting 19 species, he had the idea to count creatures rather than kill them. He proposed this idea in the December 1900 issue of Bird-Lore magazine, (later Audubon magazine), and it became the annual Christmas Bird Count. Antrim County bird count conducted in late December.

“I love kayaking in winter and will go out until ice forms. I particularly love kayaking through skim ice; the sound of it cracking as my boat cuts through it, the way it shatters under my paddle, it's thrilling. So last week, at first ice on Intermediate Lake in Central Lake, I carted my boat to shore, launched, but quickly found with every paddle stroke the ice was getting thicker. I made it about six boat lengths when the ice wouldn't break anymore. So I paddled backwards through the water path I'd just made, and hauled my boat home. “_Holly Polich

“My favorite winter activity is a hike at Maplehurst. It’s the best. “_Bobbitt Bellingham

“There is nothing like being in the woods during winter – hiking, cross country skiing, relaxing near a small stream. There is this beautiful quietness from the snow blanketing the ground and covering the trees, while the sounds of the birds and scurrying animals are amplified. The refreshing cold air heightens the experience and the promise of warming up after the adventure makes me stay out longer. Winter brings a calmness to the woods that also causes me to slow down and enjoy the season. “_Christine Crissman

Water levels have reduced steadily during the fall to just about normal recorded lake levels according to the Army Corp of Engineers (Detroit). Wildlife has been about normal for this time of year. We have spotted a few mink around the gas dock, a musk rat swimming along the near shore docks. We've had quite a few merganser ducks this fall however we had no red head ducks which we've had in the past. Elk River we've had tons of mallards both hens and drakes. Fishing in spring of 2022 was hot for small mouth bass and pike. In the fall we did observe some salmon and muskies at the point near the dam. Haven't seen the bald eagles yet this fall/winter. _ Mike Singleton, Harbor Master, Edward C. Grace Memorial Harbor

Popular botanical symbols for Christmas include the holly and the ivy. English ivy, Hedera helix, is native to most of Europe and Western Asia. Michigan holly, Ilex verticillate, is a Michigan native species, more common in the upper peninsula. It is a deciduous shrub featuring a mass of red berries, usually found growing in wet or low-lying areas. That makes it great for a rain garden, but it will thrive in average soil if watered during drought conditions. The red fruits often last well into the winter, hence one of the common names for this plant: winterberry. The fruits provide sustenance for many different songbirds and small animals. _University of Michigan Herbarium.

"I will honor Christmas in my heart, and try to keep it all the year. " Charles Dickens 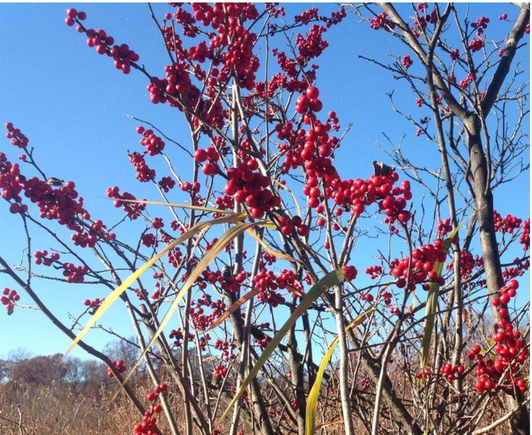