September - As fall colors start to light up our natural areas, we asked GRTLC Nautralist Angie Bouma to describe one of her fall favorite native species for fall color in our vicinity.

Sumacs - This is the time of year when Sumac stands out with its pinnately compound leaves glowing in the light of the fall sun and maroon seedheads rising above the leaves.  Sumacs are a fascinating group of plants in the same family as Cashews and Poison Ivy, among other well-known species.  We have four sumac (Rhus) species native to Michigan; Staghorn, Smooth, Fragrant, and Winged.  Of these four native species in Michigan, Staghorn and Smooth sumac are the best known since they grow well in habitats that have been impacted by human use, including old fields and forest edges.  According to Michigan Flora (michiganflora.net), these two species frequently hybridize and look almost identical, except that Staghorn sumac has branches covered in dense hairs, hence the common name "Staghorn", for its resemblance to deer antlers. Both of these species grow very quickly and unless mowed back, they can form large colonies, and reaches heights of 20-30 feet tall as the colony ages.   Sumacs are easily confused at a distance with many other tree species that have pinnately compound leaves, including the invasive Tree of Heaven (Ailanthus altissima), but their cone-like seedheads and other characteristics are distinctive, and knowing a few identification tricks like the habitat preferences of each species helps.  For example, Staghorn sumac thrives only in drier, open habitats, unlike Poison Sumac (Toxicodendron vernix, a closer relative to Poison ivy) grows only in wetlands and has white berries.

Sumac species are treasured around the globe and the berries of various species have many uses in Native American tribes including as a refreshing lemonade style beverage, where Sumac is known as baakwaanaatig by the Ojibwe, and Rhus coriaria is a very popular spice in the Middle East where the term "Rhus" or red in Arabic is derived.  Staghorn sumac is also an important component of the natural landscape as a food for wildlife including many species of birds, and is an early successional species in open, dry fields on the edge of forests. The dense thickets of Staghorn Sumac provide respite on hot summer days for saplings like pines, maples and oaks that grow in the shade of its leaves on hot summer days, and in the winter is an invaluable source of food for wildlife, so letting this species grow or managing it a landscape could be a fun adventure.  -Angie Bouma, Grand Traverse Regional Land Conservancy.  More info on land protection and citizen science, visit www.gtrlc.org 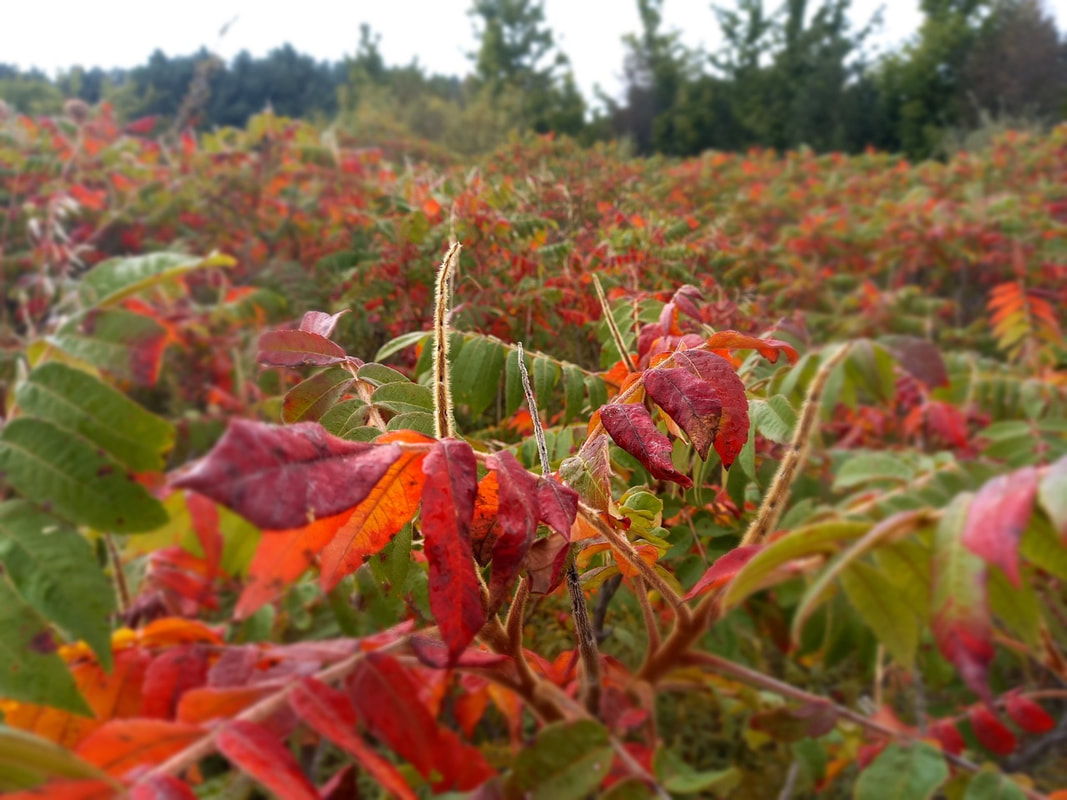